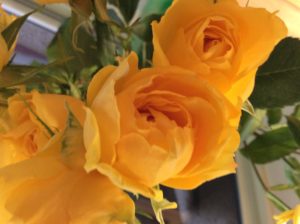 The gift of the yellow rose is a concept  that comes out of the Montessori peace curriculum where a silk, yellow rose is used in the classroom much like a talking stick for the students to take turns sharing their feelings and resolving their differences.  Dr. Maria Montessori put her educational philosophy forward during the throes of WWI and it remained relevant through the second World War.  Part of her drive was to instill the concept that each one of her students had the potential to be a peacemaker.  In the classroom today, we carry on her legacy.  It is our belief that children in a classroom are no different than people interacting with others in society.  There will be stretches of peaceful interactions and then differences of opinions will arise naturally in time. It is natural to feel the full range of emotions from happy to sad, and to feel the frustration of not getting their way. It’s during that time, when we guide the students to verbalize their disappointment and find their voice in an exchange that is respectful and on point. 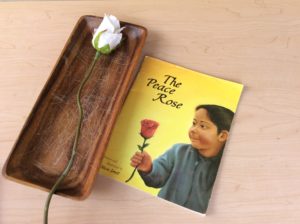 Dr. Montessori had such respect for the intelligence and latent independence buried in the soul of a child that she was determined to create a learning environment that supported her inspiration.  Early on, she shifted the common view that children were undeveloped adults to that each student was an individual child responding to the stimulus of their environment and directly affected by the quality of relationships of the pertinent people in their lives.  The power of the Montessori method today is that we collectively are modeling a way of existing in the world.  We are sensitive and committed to living the values of respect, trust and honesty.  Not only do we offer a pathway for developing intellectual acuity, but the structure and context of interacting with other people is engaged and nurtured daily. 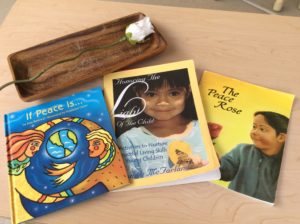 In the classroom today when differences arise, the Montessori teacher is listening very carefully for the child’s perspective and the human tendency to blame others for their discomfort.  It is encouraged that a student seek a teacher’s assistance if they feel like they are stuck, and there is little or no response from the other child.  However, even then the teacher is there to help facilitate conversation between the children, not to solve the conflict for them. As the children learn to identify their emotions and verbalize their discontent, they learn to see the other child as someone very much like them trying to make their way in the classroom.  An inner strength begins to emerge when children experiment with compassion, and open communication.  They feel the power of expressing needs and then listening to one another. Conflict resolution arises naturally in an environment where peace is cherished and the power of verbal exchange is experienced successfully.