Cooking projects in the FMS kitchen happen on a regular basis, filling the office with delicious scents and actively involving students in the preparation of food.  Sometimes, the food that is being made is to celebrate birthdays for the month.  Often there is an opportunity for our students to experience an academic lesson represented in a food item.  Last week, P2 students entered the kitchen and found that the entire solar system was laid out on the table in front of them. 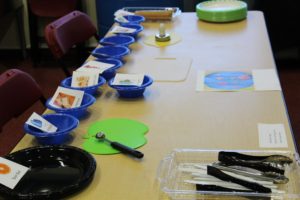 The task was to paint a plate with yogurt signifying the atmosphere and the boundless space around us.  The sun was represented by an orange slice, with Earth showing up as a slice of kiwi.  The asteroid belt was laid out by using raisins.  Each piece of fruit was proportional in size, representing the scale of the planets in space. This visual and tactile lesson was further enhanced when the students were able to eat the fruit and use their sense of taste.  Space was explored, a lesson imparted, and a memory made when the fruit was eaten…a true Montessori experience.